I: Foundations of Modelling with Excel Chapter 2: Excel Foundations 2.4 Formatting and Colour-Coding

In the course materials we frequently use the colour scheme:

The idea of using colouring and borders in consistent ways is to make the role of each item clear to oneself and to other users. This is important for several reasons:

The following image shows (in its top right) the menu icons on the Home tab that were used to format the input cells with the colour scheme above, which is implemented by selecting the cells and applying the colouring: 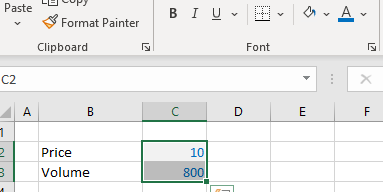 Borders around cells or ranges can be added in a similar way – by using the border (selected from the drop-down menu to the left of the font-colouring options), as shown below:

The final model formatted in this way would look like:

Numbers can be formatted to shows decimal places, or as percentages, or as currencies and so on. The formatting options are on the Home tab:

The main options can be seen using the drop-down menu.

An important formatting type is percentage. For example, a figure entered into a cell as 0.1 and subsequently formatted as a percentage would be shown as 10%. The following are some examples:

These cases are shown in the image below: