Each cell can be empty or can contain one of:

Numbers or text can be entered into a cell by selecting it (with the mouse or equivalent tracker pad), typing in a text or numerical field, and pressing the ENTER key.

It is important to note that the content of every cell is separate to that of other cells. That is, although cells B2 and B3 contain text which describes the content of the associated numerical values (in C2 and C3), this association is of a visual nature only. This apparently trivial point becomes important in more complex modelling situations.

The building of a model requires that dependencies between items are expressed using numerical calculations. In many cases, this requires only basic arithmetic operations (which can be implemented from the keyboard):

For example, an influence diagram in which Sales Revenue is to be determined from Price per unit and Volume Sold in units could look as in the image:

The corresponding Excel model is one in which Sales Revenue is calculated by multiplication of price and volume:

Some of the points related to the creation of the formula are simple but important:

In the early stages of working with Excel, some mistakes are easy to make.

For example, if one had entered C2*C3 into cell C5 (i.e. without the =), then there would be no formula to evaluate, and the result would be the text field as entered: 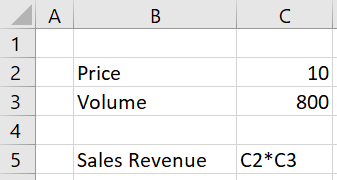 The formula that has been created can be viewed in several ways. One way is to select the cell containing the formula (i.e. C5) and to the press the F2 key on the keyboard, which results in: 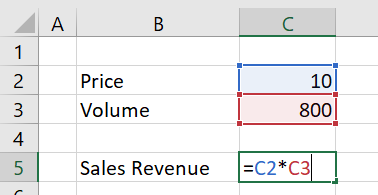 To exit, one can use the ESC key.

Other ways to view formulas are covered in the next section, and include: