I: Foundations of Modelling with Excel Chapter 1: What is Financial Modelling? 1.2 Simple Example I: Estimating Ocean Water Volume

Let us consider the issue of how to estimate the amount of water in the world’s oceans. This could not only be of general interest, but also may be needed when assessing the heat-retaining capacity of the water, or other aspects related to atmospheric physics and climate behaviour.

The following description is broken into the stages of concept, implementation, and conclusions.

From a conceptual point of view, a simple model for the volume of water could be:

The table in the image below shows the assumptions, step-by-step calculations and the result. (The assumption values are the items with blue font and grey background, the calculations are in cell with black font, and the final result shown in the green-shaded cells, with the last cell showing the result in million cubic kilometers (i.e. the estimated volume is approximately 1323 million cubic kilometers of ocean water): 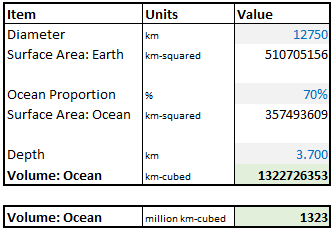 The core result of this model is that the estimated volume is approximately 1323 million cubic kilometers of ocean water. From the model as presented, it is difficult to draw further relevant conclusions, since we have not explained the context or need for this specific estimate sufficiently (e.g. in terms of decisions or its impact on climate models or measures to control or limit the effects of a changing climate).

However, in general, one can see that models (and modelling processes) can provide a framework to:

The additional comments below briefly discuss some of these points

It is clear and intuitive that this figure is unlikely to be exact for several reasons, discussed in the following.

There may be some uncertainty in the input values. Whilst the diameter of the earth and the proportion covered by ocean water may be known quite precisely, these values may not be exact. In particular, the average ocean depth is likely to be most uncertain: First, at the time of writing, the oceans having not been fully mapped (notably in parts of the southern hemisphere). Second, the calculation of the average is not straightforward: Each ocean is quite different in size and general form (the Pacific Ocean having an average of over 4km, whilst the Arctic Ocean is around 1km on average), and each has a sub-surface structure which is not level.

The following image shows the range of impact for the total estimated volume, as the assumption values are varied across a range of various published estimates for each parameter (that were obtained through simple internet research at the time of writing some of which may be more credible than others!): 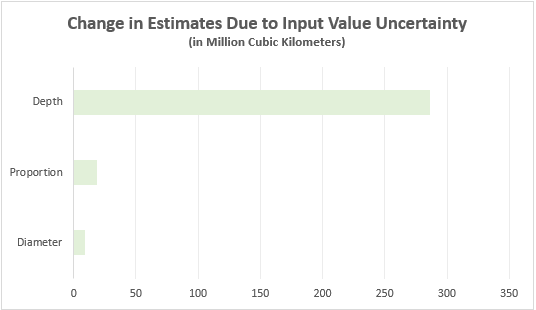 When building any model, assumptions are made that are of an inherent or structural nature, and which are therefore intrinsic to the model.

In principle, such issues can be dealt with by building more robust and detailed models, at least providing that the issues are identified and can be understood or that relevant data can be found or collected. For example, one could adapt the current model so that the surface area uses a formula for non-spherical shapes (e.g. ellipsoids), and so on: Whether this is worth doing will depend on the complexity and benefit of doing so.

The model mapping and parameter values may be incorrect for reasons that we are simply not aware of, and essentially can do little about (other than study the situation in more detail and to improve one’s overall understanding of it). It could be that the model does not contain variables that it should, simply because we are not aware of them.